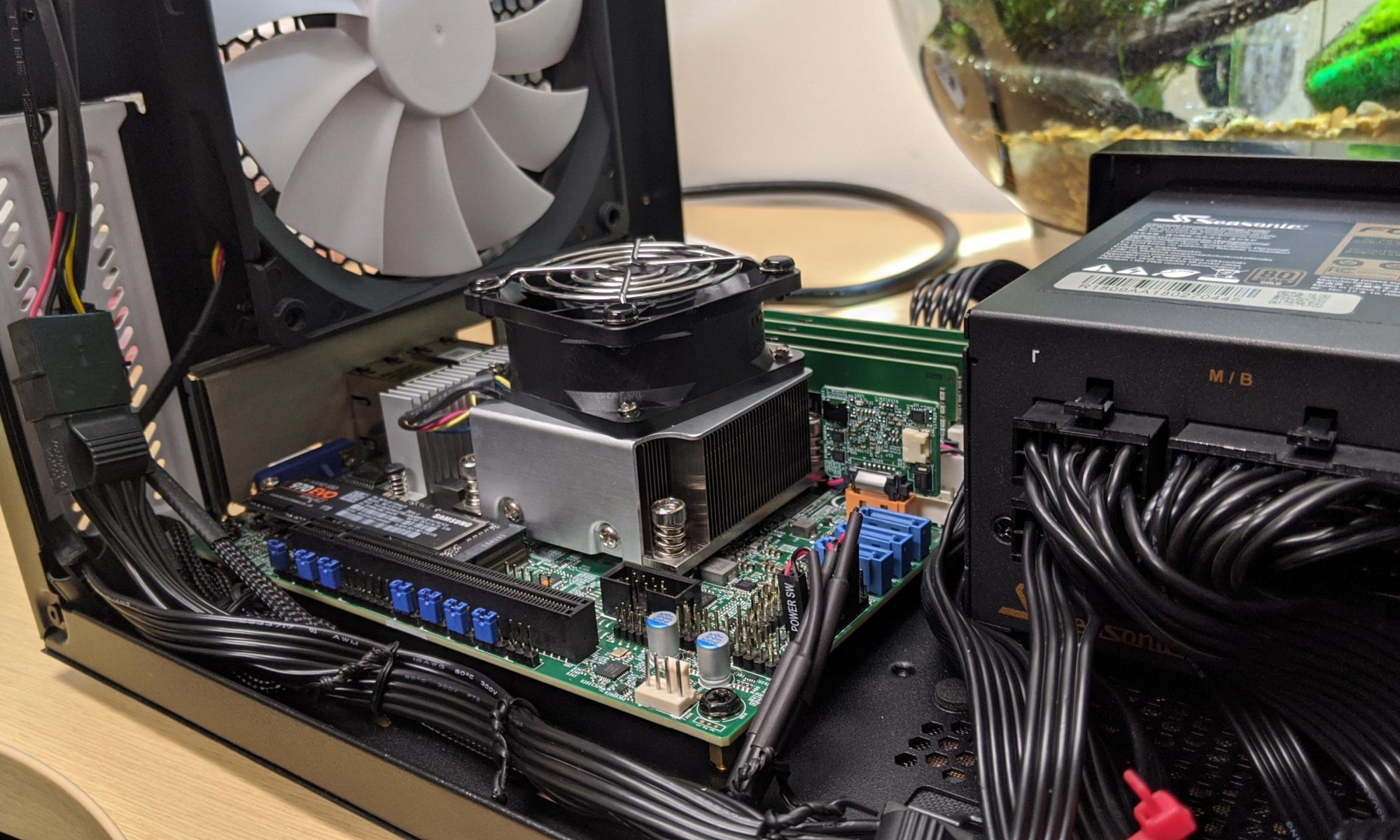 Over the last few weeks I’ve been slowly planning and ordering the parts for a new server build in the house. There are some really neat things about this build and the design approach that has made this a very interesting endeavor.

For at least the past year I’ve been toying around with the idea to replace my aging HP Proliant DL160 G6 with something more energy efficient and better tailored to the needs that both myself and the family have had with the Proliant. I was leaning more towards finding another used server from eBay or even a small server from Amazon, but instead decided to go for a more hand on approach in building a server for the house. This build will need to be able to continue supporting the same EXSi environment that the older Proliant has dutifully maintained over the last decade.

SuperMicro has a interesting AMD SoC lineup that makes use of AMD’s Epyc 3251:

So this little ITX board has a CPU with dual threading with a max clock frequency hitting 3.1GHz, all the while sipping 55W of power.

The board itself is pretty sweet since it supports up to 512GB of ECC RAM as well as sporting a single NVME M.2 slot, a single PCI-e 3.0 slot, and 4 1Gb NIC’s plus a IPMI port. More info on this board can be found from Supermicro’s product page:

There was a brief moment when planning on this buildout that I was really questioning if this build is going to fit the bill that I was hoping to use it for, or that it would not be utilized to it’s potential. After a couple nights of drafting the kinds of situations that I would throwing this into I felt more confident in the choice to go this route. The main reason being that there is a good chance I will be running more than just the few server instances 24×7 in the home environment. If all goes well I will more than likely shift all my instances including those being handled by the VPS providers to this little fella. Time will decide as far as the consolidation of those outside assets, but for now I am totally set to bringing over the virts running on the aging server along with all the media that the Plex server has accumulated over the years.

To help ensure Scrappy the Eypc server is able to handle all fun projects I’m going to throw its way I added a few things:

Then for power I went with the fully modular 450W SeaSonic Focus PSU which was nicely snugged into the case’s front positioned PSU slot. The case provided a power cable that connected to the rear of the case, just check out the top view of the layout picture for reference.

Next I was able to get a gently used LSI controller that was already set to IT/HBA mode which will help power the 6x 6TB HGST helium based SAS drives running at 7200 RPM. I am also adding a Crucial MX500 to this array which I hope to touch more on later.

That’s pretty much all for now, I’ll cover more on the hardware and the final layout of it all in a later post once all the configuration work has settled.