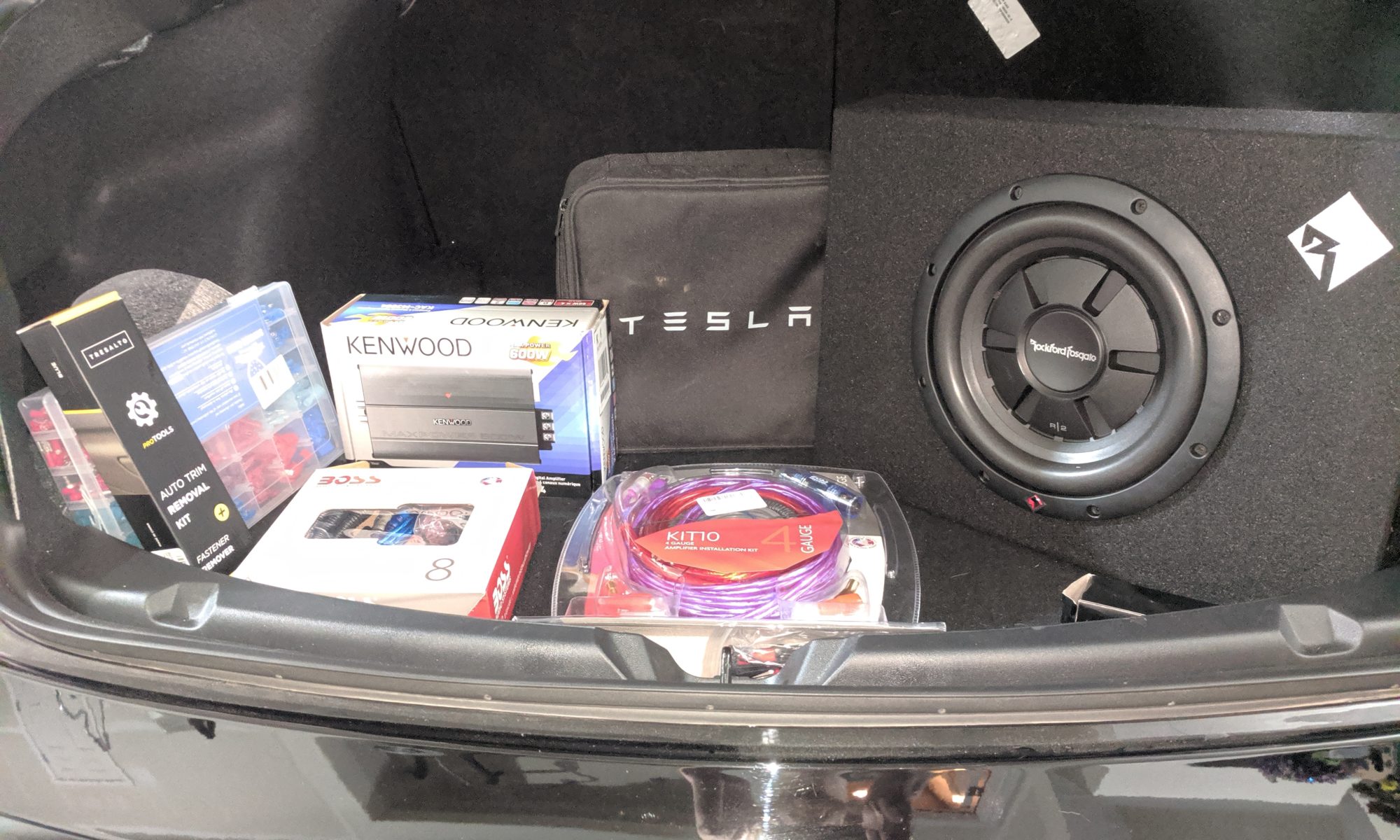 Adding some oomph to the Tesla Model 3.

One of the recent projects after getting the Model 3 was getting around to not only activating the rear dash speakers but also adding a lite weight subwoofer. On a high level view this was a pretty simple process, but due to the nature of dealing with something like as potentially complex as a Tesla vehicle I had to take my time to make sure to get it done right.

First off was going through a locating the correct color codes for the speaker wires, thankfully work in this area was already done in this thread–

One thing to note about that diagram is that the right woofer (wfr R- / R+) is actually orange/black and NOT orange/grey.

I also made use of tools and other minor equipment to help tap into the speaker lines:

And these t-tap connectors:

The plan of attack for this installation was to keep it as straight forward as possible while also making sure to properly mount and connect the amp to both a power source as well as the two rear dash speakers and the 10″ sub in the rear.

As for a power source since Tesla engineer has said auxiliary equipment should connect to the 12v battery in the frunk that’s where I went with in my install. This actually worked out in my favor since there was a place under the main console area just big enough for the amp that also had easy access to the rubber grommet separating the foot well from the frunk area. I was able to get the 4 gauge cabling connected to the 12v battery and ran to where the amp would eventually be placed.

Next up was getting the subwoofer cable ran all the way to the rear. This was a bit tedious, but thankfully the Tresalto tools made it easier. While in the back I spent sometime working out where the connection was for the inactive rear dash speakers where, eventually I found the cable harness:

I this kind of interesting since before this point I thought the speakers were just software set to off, but nope they are physically disconnected. So much for the idea of some future update to pay and unlock.

At this point I started making use of the T-tap connectors and connected those cables to the cables running back to the amp. I then decided to use the front woofer speakers on both the left and right side of the car for my sound sources. Accessing those cables were pretty easy if a bit awkward due to the angle I had to work at while adding the t-tap connection points. Finally I added the amp to the spot under the main console area:

With all the main cabling ran I started the next phase of getting the power cabling connected up and grounded. Thankfully there was a ground point on the passenger side foot well that was easy enough getting connected to. Once all that was good to go I went through and got most of the covers on before testing the sound out. There was still a loose t-tap connection on the left rear dash speaker that had to be re-crimped, other than that all output sources were up and working.

Its been about a month now without issues, which is great since there has been some chatter on forums on where to add amps and other auxiliary devices to a model 3. So far I haven’t had any problem with the current power configuration, and because I’m using such a lite weight amp with builtin auto on/off there isn’t any noticeable issue with vampire power draws while not in the car.